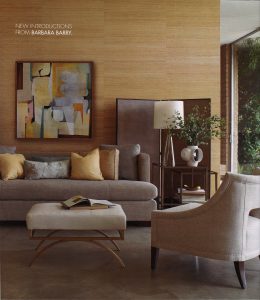 I met Barbara Barry at the Baker Showroom in Georgetown.  She looked just like her pictures and she could not have been more gracious.  That was sometime in the 1990’s, not long after her explosion on the interior design scene with her Art Deco inspired stream-lined furniture designs and espresso stained wood.

The Baker Knapp & Tubbs showroom at the Washington Design Center, long known as a paragon of very traditional and expensive furniture, completely revamped their showroom to embrace the transitional look of Barbara Barry and later several other designers.  That was huge for Baker to take that plunge.  It was years later that several other showrooms followed their lead.

Fast forward to 2015, it looks like Barbara has jumped on the Mid Century inspired bandwagon.  As her ad says “Refined forms. Natural elegance.  A sense of balance and harmony. I think Barbara has another winner of a look.

To create your own Mid-Century look, call a professional to capture your own unique style.